6X3.75 GIANT MULTIHEADED BEST TORCH I HAVE EVER SEEN!!! THESE ARE ABSULUTELY BOOK QUALITY CENTERPIECE

Coral reefs are highly productive and visually stunning marine ecosystems that are formed mainly of calcium carbonate secreted by the colonies of reef-building coral polyps. They represent the planet’s most valuable resource, both in terms of the high global biodiversity and the wide variety of ecosystem goods and services they provide. Sir Charles Darwin, in his book “The Structure and Distribution of Coral Reefs”, had rightly described these underwater ecosystems as an “oasis in the desert of the ocean”. Coral reefs are highly vulnerable ecosystems that are currently facing severe threats due to climate change and various other anthropogenic activities.

Aerial view of the Great Barrier Reef in Australia

Temperature: The reef-building corals are very sensitive to temperature fluctuations and are generally found in warm tropical and sub-tropical oceans (located below 30° latitude), where the annual water temperature ranges between 20-28°C. It has been estimated by various studies that, if the water temperature becomes lower than 18°C or increases above 30°C, most of the corals will get bleached.

Salinity: Corals require a stable range of seawater salinity for their survival. Researchers have estimated that if there is a drop in salinity below 20ppt for more than a day, then it will lead to the mortality of corals and other associated reef organisms.

Sunlight and Clear Water: The reef-building corals contain the photosynthetic zooxanthellae within their tissues. These algae require sunlight for photosynthesis and growth.  Hence, the coral reefs are usually found within a depth of 50m in the clear, nutrient-poor, sediment-free, and shallow oceanic waters.

Occupying less than 0.1% of the world’s ocean area, the coral reefs are scattered throughout the Western Atlantic and the Indo-Pacific oceans. The Western Atlantic reefs are limited to Bermuda, the Caribbean Islands, Belize, Florida, the Bahamas, and the Gulf of Mexico. About 700 species of corals are found in the Indo-Pacific region while only 145 species are found in the Atlantic region. It has also been observed that the coral reefs thrive best on the eastern shorelines of the continents where the shallow substrates in the open oceans provide suitable habitat.

Often referred to as ‘rainforests of the sea’, the coral reef ecosystems are widely known for their biological diversity, as they support about 250,000 known marine species on the planet – which includes over 4,000 fish species, 700 coral species, and thousands of other marine flora and fauna.  By supporting such a high variety of flora and fauna, the coral reefs help to maintain a functional ecological balance between the different predator and prey species.

The autotrophs in the coral reef ecosystem include photosynthetic organisms like phytoplankton, cyanobacteria, algae (macro and micro), and seagrasses. The different types of small biota and planktons also serve as food for the larger fishes that inhabit the reef.

Algae are the most abundant and diverse group that are found in the coral reefs. They vary in size from the microscopic unicellular zooxanthellae to the more complex and multicellular seaweeds. Green, brown and red seaweeds (macroalgae) are widely distributed within the coral reef ecosystem.  However, the excess growth of algae due to pollution from the harmful chemicals significantly reduces the oxygen availability for the other organisms inhabiting the ecosystem.

Besides algae, other species that also provide benefits to the coral reefs are the seagrass meadows. Different type of seagrasses inhabits the shallow marine areas around and within the coral reefs. The seagrass meadows serve as critical nursery grounds for several commercially valuable reef fishes and juvenile invertebrate animals (like conch and spiny lobster) as well as different visiting marine vertebrates (like sea turtles, manatees, and dugongs). In addition to this, they also shield the coral reefs from pollution and freshwater.

The mangroves which are located at a distance from the main reef formation also play a significant role in the marine ecosystem. The mangroves enhance the abundance and diversity of reef fishes and together with seagrass, they help in increasing the productivity of the coral reef ecosystem.

The development of symbiosis between the reef-building corals and the dinoflagellate zooxanthellae is the main driving force promoting the high productivity and growth of coral reefs.

The reef-building corals form a close association with the microscopic single-celled photosynthetic algae called zooxanthellae, that resides inside each of the coral polyps. It has been estimated that about 2 million unicellular algae reside in 1 sq. cm of the coral tissue. The zooxanthellae provide oxygen from photosynthesis as well as nutrients (sugars and amino acids) for their cnidarian host. The corals in turn supply the algae with crucial inorganic compounds that are required for photosynthesis, besides providing a safe and protected habitat for the symbiotic algae. The photosynthetic process helps in carbon fixation by transforming the inorganic carbon into organic carbon. The organic carbon is then released into the surrounding water by the corals, as dissolved organic matter (coral mucus). This mucus acts as a food source for many reef organisms and forms a base for the rich marine ecosystem. The coral reefs also exhibit a variety of bright and vibrant colors due to the presence of these symbionts.

Cyanobacteria and benthic diatoms are also abundant in the reef ecosystem and cover the surfaces of seaweeds, seagrass, mangrove roots, and also on the open sand between the reefs. The high productivity and biomass of these microalgae provide for most of the primary production occurring with the reef ecosystem. The cyanobacteria also help to build the structure of the reef and serve as an important food source for other reef species. 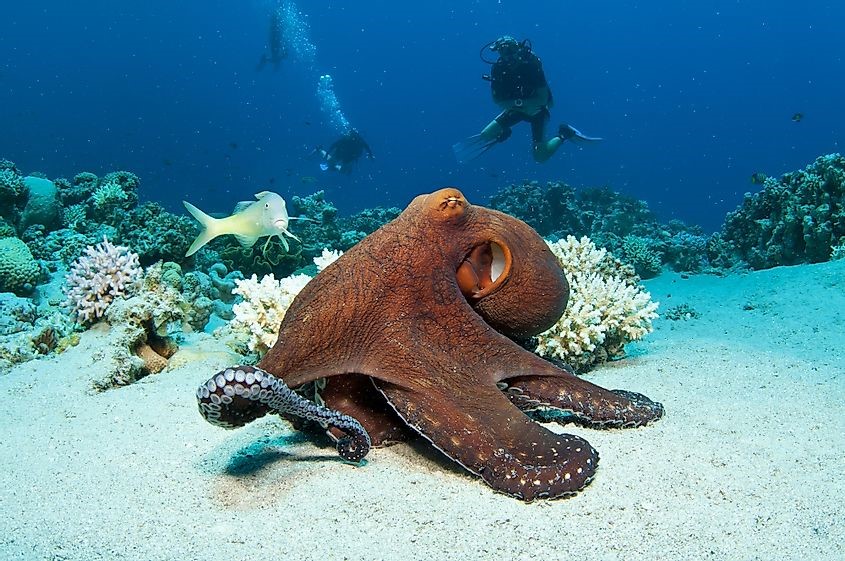 The coral reefs provide a perfect habitat and a safe shelter for a vast number of fishes, crustaceans (mantis shrimp, spiny lobster, and hermit crab), echinoderms (sea urchins, sea cucumber, and starfish), mollusks (nudibranch, giant clams, octopuses and common reef squid), sponges, sea anemones, sea turtles and other marine faunal species. The faunal biodiversity around a coral reef also significantly depends on the time of the day as some species rely on the reefs during the day while others rely on the reef at night.

Invertebrate animals like sea urchins and sea slugs play an important role in the coral reef ecosystem. They feed on the algae and seaweeds thereby preventing them from smothering the coral reefs. The sessile sponges produce chemical compounds to deter predators. Polychaetes like the Christmas Tree Worm are generally found embedded in the head of large corals. The shrimps and crabs are mainly found on the body surface of corals and fishes and function as “cleaner stations” – feeding on the mucus, parasites, and organic particles on the host bodies.

As estimated by scientists there are over 4000 species of fish residing in the world’s coral reefs and these fishes are extremely diverse in their coloration, forms, and behavior. The fishes have also developed a wide range of adaptations for ensuring their survival in the reef habitat. To optimize their movement, the fins of the reef fishes are differently designed compared to the other ocean fishes. The reef fishes also possess a wide range of colors and patterns primarily to provide camouflage and to blend with the surrounding reef. Some notable teleost fishes that are found within the coral reef ecosystem include cardinalfish, porcupinefish, butterflyfish, squirrelfish, parrotfish, trumpetfish, surgeonfish, goatfish, rabbitfish, rudderfish, damselfish, moray eels, gobies, wrasses, snappers (lutjanids), and grunts (pomadasyids). Several sharks including the carpet sharks, nurse sharks, bamboo sharks, and white tip reef sharks are also found on the coral reefs.

A school of colorful Parrotfish feeding on a tropical coral reef

The species of fishes that are found on the coral reefs, occupy various levels of the food chain. The most abundant herbivorous parrotfishes scrape microalgae from the surfaces of the coral colonies; while the butterflyfishes are the most ubiquitous and colorful among the benthivores. The carnivorous reef fishes like grunts and snappers feed on other small fishes and invertebrate animals. The sharks are apex predators and help to maintain greater biodiversity in the ecosystem.

Large marine mammals are rarely found in coral reefs. However, few mammals are observed in coral reefs, when they usually visit to feed. Some most common mammals that are found in the Great Barrier Reef include dolphins (like spinner dolphin and bottlenose) and whales (such as the humpback and Dwarf Minke whales).

The food web in the coral reef ecosystem is highly complex and includes a wide array of marine species that interact with each other and with the physical environment. The three basic trophic levels that are characteristic of all coral reef food webs have been discussed here. 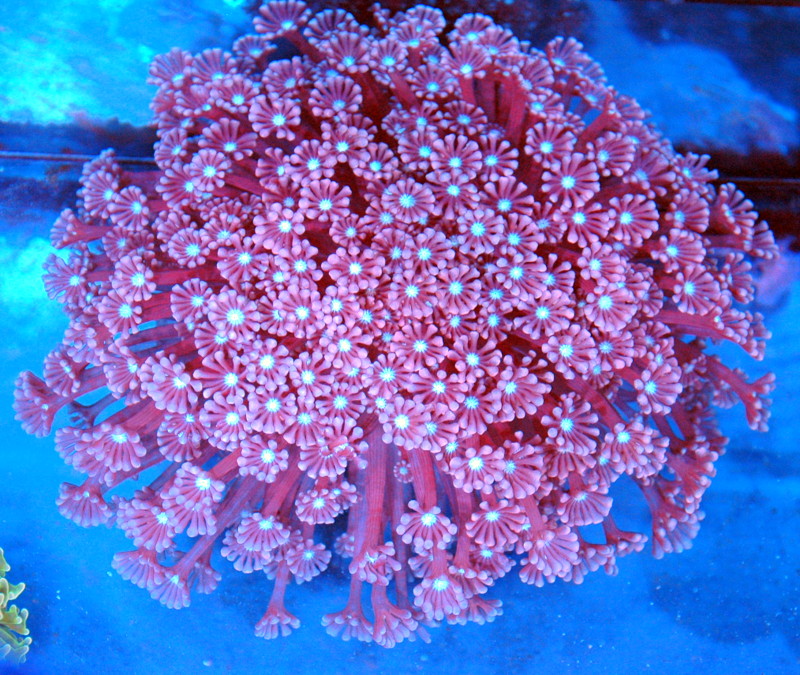 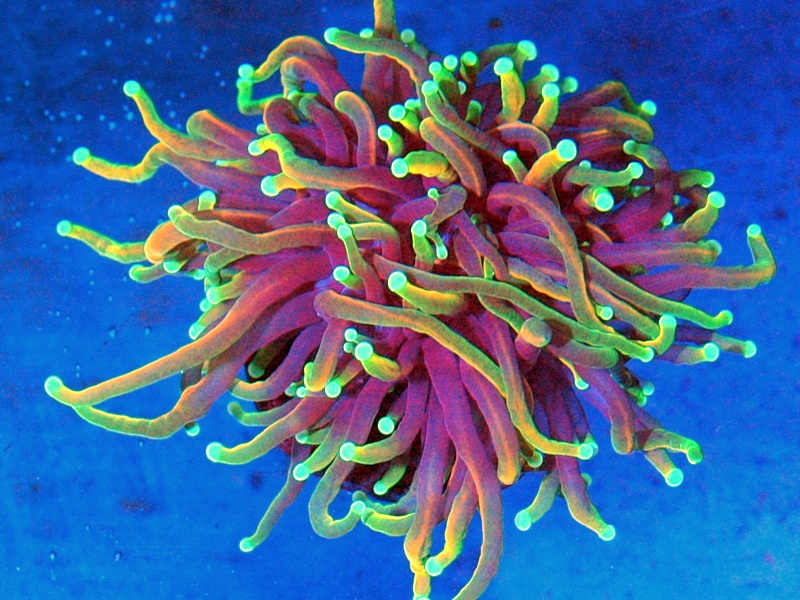 Handpicked From Hundreds Of Gonipora – All Incredible Colored Specimens 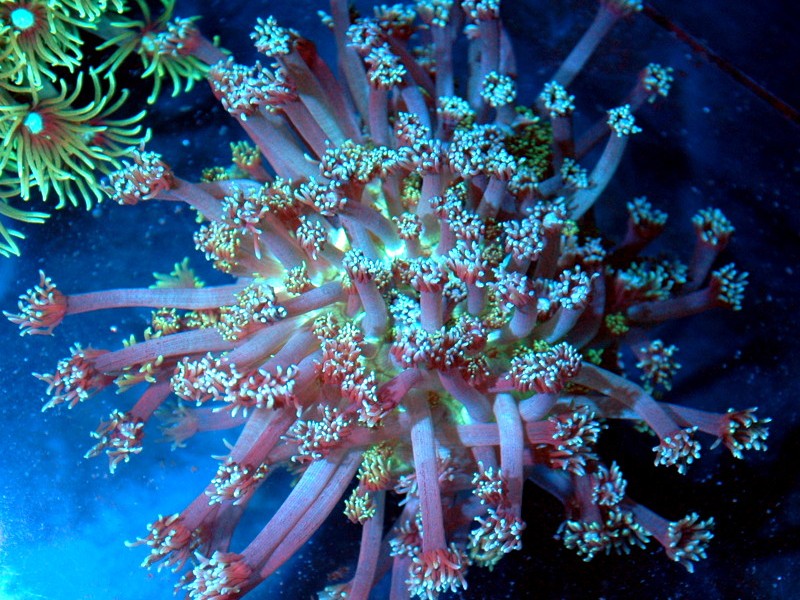 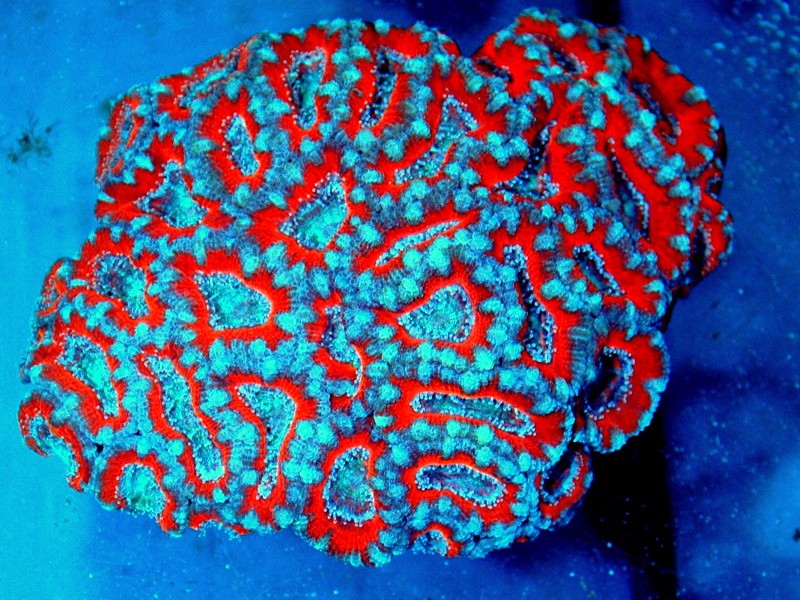